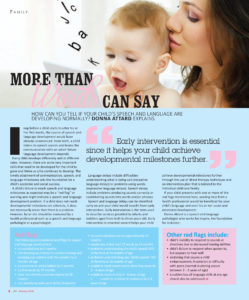 Every child develops differently and at different rates. However, there are some very important skills that need to be developed for the child to grow and thrive as he/she continues to develop. The timely attainment of communication, speech, and language milestones sets the foundation for a child’s academic and social success.

The following are considered as Red flags for speech and language development:

Other red flags include:

If your child presents with one or more of the red flags mentioned above, seeking help from a health professional would be beneficial for your child’s language and even social and emotional development.

Personalised greeting cards company kicks off by being generouspreviousAttention Deficit in children – a new epidemic?next