Of help, hope and inspiration

Speaking about disability is never an easy task, however, Mrs Buttigieg and her husband greet me with easy smiles and are instantly very open about the trials and tribulations of their son Hayden who suffers from autism and ADHD: “I always knew Hayden was different,” Mrs Buttigieg says. “However, I think how different he was from his peers was cemented in my mind when he was in the second year of kindergarten, when he was about four. I realised that he was doing thing a lot later than other children. I had already had a daughter so I knew what to expect, but as Hayden spent more and more time alone and seemed to prefer his own company, it really got me thinking. Of course, now that he is fourteen, the difference between him and his peers is far more pronounced.”

An avid lover of arts and crafts, photography and video games, Hayden enjoys spending his time pretty much like many people in his age group; however, it is not always easy for him to fit in: “Hayden doesn’t like being touched and if he is touched unnecessarily it can greatly upset him. Unfortunately, he has encountered a few problems at school because many people do not understand his condition. He doesn’t like people talking in loud voices and sometimes doesn’t enjoy certain subjects because they have bad connotations to him. Sometimes it can be an uphill struggle to get people to understand.”

Although he attends a mainstream school, Hayden has a Learning Support Assistant (LSA) who is devoted to giving him one-to-one attention and he is also eligible to take part in the Inspire Winter Programme, which targets children with disabilities who attend mainstream schools and who follow an adapted school/class. The programme works on the principle of cooperation between Inspire staff/volunteers and LSAs, with both parties working together hand in hand in order to help disabled children reach new and exciting goals. Children or young teens who take part in the programme are taken out of school once or twice weekly and taken to Inspire, where they spend the morning learning and interacting through a number of fun and educational activities such as Multi-sensory Therapy, Therapeutic Horseback Riding, Creative Therapy and Hydrotherapy. Although Inspire offers this service for free to more than 240 children per year, it actually costs Inspire €700 per child to run. Such extensive costs can only be covered through the generosity of sponsors. “Casino Malta, is very glad to have had the opportunity to sponsor Hayden’s programme. This is part of our on-going programme to support the community and those in need,” explained Christos Caristas – General Manager at Casino Malta. 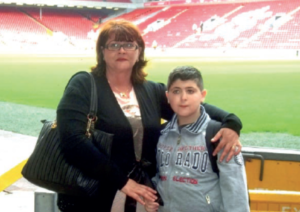 Hayden has participated in the Winter Programme for two years running and his mother is greatly pleased by the results and growth she has seen in her son: “My son has always been terrified of animals, but since he has been participating in the programme, he has learnt how to be comfortable around horses. At first, he would come home and tell me that he was scared of riding horses because he was worried that he would hurt them, but now he enjoys brushing and leading them around and is comfortable with petting rabbits too. He also loves the multi-sensory room and, although he’s not a big talker and very reserved, he often tells me how much he enjoys his time at Inspire.”

Indeed, Hayden has so much fun at Inspire that he often tells his mother that he can’t wait till the next time: “My son doesn’t really talk a lot about what he’s feeling and thinking, but when it comes to the programme, he always tells me how much he prefers it to going to his lessons. He’s pretty much like all boys his age in that regard! That said, he doesn’t do this for all outings; in fact, normal school outings cause him a lot of anxiety as he worries that he will get lost or that other children will pick on him even though his LSA is usually with him at all times. We are really happy about the fact that he considers Inspire to be something of a safe space for himself and a place where he can feel comfortable and make friends.”

Highly sensitive, autistic children tend to shut down and display signs of frustration and aggression if they feel a situation is too much too handle and, Hayden knows this feeling all too well: “The key with Hayden and all autistic children is patience and empathy. They don’t like being shouted at or put in situations which they cannot deal with. It has been a bit of a battle to get teachers and outsiders to understand that all these children need is some special care and a different level of understanding. Last year Hayden felt let down by a friend and he spent an entire year keeping an empty chair for his imaginary friend to sit on. To be honest, we just let him get on with things at his own pace; there was no point in trying to rush him to get over the pain he felt. Although many people feel that autistic children do not have a perception of the world around them, the truth is that they understand and process far more than we can imagine: they simply need to do it at their own speed. Just because we can’t always understand it, it doesn’t make it less valid or real.”

Mrs Buttigieg feels that Inspire’s winter programme has been greatly instrumental in aiding her son’s personal growth: “We’re very grateful to Casino Malta and Inspire for making this possible. To be honest, it’s enough for me to see him be more at ease around animals and show enthusiasm towards attending something he enjoys; he doesn’t generally take an interest in daily life. The fact that the programme helps teach him how to be more independent and helps him to engage better with others gives me a lot of hope for his future.”