Love me, wonky bits and all…. By Alison Bezzina

Mario Borg (36) is handsome, energetic and strong. He’s soft spoken, well groomed and his eyes are full of kindness.

I meet Mario at the Inspire Fitness Centre in Marsascala. I watch him as he maneuvers his wheelchair around the machines like a pro, and after his gruesome workout I asked him to join me for a drink. “It’s great that I get to come here for free,” he says gratefully, “this the place is fully equipped, accessible, and adapted to my needs. It’s very rare to find a gym that caters so well for people with disabilities.”

“I don’t know what it is,” he says with a look of despair. “Maybe it’s because of
my disability or perhaps it’s my characeter. Sometimes I think that I’m too nice,
and so I come across like child making it difficult for women to relate to me.
Maybe I come across as too negative but who isn’t negative at times?”

“I’m aware that a physical disability puts people off, but I also know of a few
disabled people who have great long term relationships, so I know that I’m not
vying for the impossible. It’s just a question of finding the right one.”

“Whenever I ask a woman out I get a host of excuses, the most common one
being that they are not looking to be in a relationship, but then after a while I see
them with some guy. In the past some women also made me feel as though
revealing my feelings to them was wrong, and soon after they started to avoid
me. Because of so many rejections and excuses , today I am afraid to even get
close to a woman, even if it’s just talk and to get to know each other. Of course I
know that this fear is costing me a lot of opprotunities but unfortunately I’m not
one of those guys whose appearance makes girls melt. Having said that I’m not a
monster with four heads, and even if I were, it’s not in the least contagious,” he
adds with his dry humorous tone.

Back in 1999 Mario attended a course in Wheelchair Dancing at Inspire and
though he was completely new to the sport, he soon went on to compete and
winning many prestigious awards both locally and internationally.

“That was a good phase in my life” adds Mario, “but it seems that all good things
come to an end, and circumstances made me leave the dancing scene.”
We go on to talk about Mario’s love of the arts and the book of Maltese poetery
that he published in 2001 called ‘Minn Qiegh il-Wied’. He tells me that he loves
the performance arts and that he’s enjoyed taking part in a local TV drama but
soon the sadness and disappointment in not finding love soon return to the
surface.

“I’ve put my heart out on a sleeve, I’ve written love letters, and I’ve
given my all 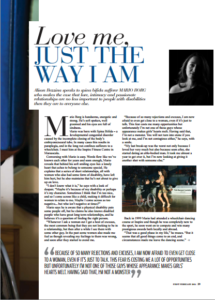 to make my previous relationships work, but unfortunately most women can’t look beyond the physical, and for them, sexy can never come in someone in a wheelchair. Most don’t want to be with a disabled man because they primarliy wish for someone strong enough to take care of them. The funny thing is that many times the opposite happens, with the woman ending up taking care of the man and all the family. Real strength is not only physical but more importantly in character and mind. My real strenght comes from the challanges I face because of my disability!”

“As a child I was in and out of hospital. I had to have several operations, and then lots of physiotherapy sessions. This meant that I couldn’t catch up with the rest of my peers and I had to repeat several school years. As a result I lost my core group of friends and spent the last year of my school breaks pretty much alone.”

Despite this built-up sadness, Mario’s inner strength doesn’t fail to come through. “I might sound negative,” he says, “but I haven’t given up you know. I’m taking driving lessons now because I know that having more independence and freedom of movement will definitely help in finding and maintaining a relationship with a special someone. In the past I’ve always depended on people driving me to places, and
as a result I only met my girlfriends as part of a wider group of friends.
Clearly this is not ideal when you want to take the relationship one step
further,” he adds with a smile.

“My family and friends try to console me and sweeten the pill by saying that
since I have them in my life I don’t need to have a relationship. They tell me that
they love me and that their love should be enough, but it’s not enough. Even
though I thank God for blessing me with a good family and great friends, the kind
of love I’m after is different from the one that they give me. They also tell you
that it’s God’s will, as if He has to do with it. We all crave for that someone special
with whom we can share our life, our most inner thoughts, and with whom we
can also be intimate.”

“Unfortunately most people equate people with disabilities with children”,
explains Mario, “and children and sex don’t go together do they? It is
automatically assumed that because we are disabled we will not ever be sexually
active. The problem is that people percieve sex as being a dirty thing and we’re
presumed to be angels with no sex organs, no fantasies and no desires.”

“In other countries people with disabilities are given more sexual education than
they are given here, and in some places they’ve even introduced the idea of sex
surrogates who help individuals with disabilities make steps towards having a
functional sexual relationship. They work with their clients through repeated
sexual experience sessions to develop emotional and physical intimacy over time.”

“My last break-up was the worst ever not only because I loved her so much but
also because soon after she started dating an able-bodied man. It took me almost
a year to face them again, but I’m better now and I’m looking at giving it another
shot with someone else.”

The Inspire Therapy & Leisure Centre is the only fully accessible Fitness Facility in Malta. All income from memberships is directed towards specialist programmes and services for disabled people.