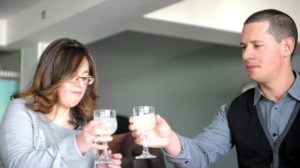 Bjorn Tabone a tall handsome man in his early twenties, attends Inspire’s Adult
Training Programme, which aims at increasing self-care skills and to promote the
physical and emotional wellbeing. He walks into my office at Inspire for an interview
about his relationship with Paula Vella.

Paula who is 33, follows him closely, shakes my hand and boldly introduces herself
as ‘Bjorn’s girlfriend.’ Bjorn’s mother, Veronica, as well as Bjorn’s tutor Donatella
also join in.

Unfortunately it is often assumed that people with physical or intellectual disabilities
are not capable or should not be allowed to enter romantic relationships, but
according to Dr. Claire Azzopardi Lane who is a specialist in Learning Disability and
Sexuality, “their to sexual identities is also outlined in the United Nations Convention
for the Rights of Persons with Disability, Article 23. This Article clearly states the right
to relationships, marriage, parenthood and to family life on an equal basis with
others.”

Paula and Bjorn first met during a bowling training session organized by the Malta
Special Olympics, but soon after, their friendship developed into something more
special.

“When I first saw Bjorn, I liked him immediately,” says Paula. “The first thing that I
noticed was how he was dressed; he looked very handsome and soon after I found
out that he also has a lovely character.”

“We’ve been together for six years now,” adds Bjorn, “but I don’t want to get
married yet.”

Realising that Paula is clearly disappointed with this statement, he clarifies by saying,
“…we’ll have to wait and see, first I need to find a job, and then we need to buy a
house.”

Somewhat appeased, Paula relaxes and Bjorn goes on to explain how he likes being
Paula’s boyfriend. “She’s fun, but quiet, and I really like what she wears. What was
that word you taught us last time?” he asks his tutor, but before Donatella can
answer, Bjorn remembers, “…funky, that’s the word right? Yes that’s it, Paula’s dress
sense is funky, and I like it.”

Paula flashes a smile towards Bjorn and jumps in to tell me about the many things
Bjorn has bought her in the past. “He has bought me rings, soft toys and other jewelry,”
she says showing me her rings. “He knows what I like, he has very good tastes.”

Bjorn’s mother, Veronica, explains that she’s never met a woman who loves so
wholeheartedly as Paula. “My son is very lucky to have met this woman,” she says,
“she really loves him, so much so that sometimes she gets very upset when he gives
attention to someone else.”

“It’s ok if he speaks to other girls,” clarifies Paula, “but only as friends. He’s my
boyfriend and I’m his girlfriend, so there can’t be anyone else.”

“I don’t want anyone else,” says Bjorn to reassure her. “One girlfriend is enough, I
don’t need another.”

Veronica explains that in the past the couple had broken up a few times because
Paula was feeling very jealous, and Bjorn was feeling suffocated. Bjorn clarifies by
adding that he also enjoys the company of his friends.

“I love Paula, but I don’t want to let go of my friends because I love spending time
with them too. Maybe later when I find a job and when we are older we can think
about that, but for now, we are good like this.”

“But it’s been six years,” prompts Paula, “you have to decide when we’re going to
get married.” 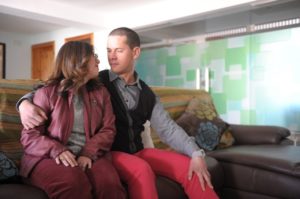 sent Paula in the past. As he passes his mobile phone to me I can see that he has saved Paula’s number under the name ‘Paula ta’ Bjorn’ and when I question him about it he very bluntly tells me that ‘that’s who she is, she’s mine,’ and to this Paula nods in full agreement.

“Not a day goes by that they don’t speak to each other,” explains Veronica. “We try to have them meet as much as possible by inviting Paula over to our house, and Bjorn goes over to her house too. We also go out with Paula’s family so thanks to this relationship we’ve also made new friends.”

Veronica is not quite sure as to what the two love birds understand by love and long term relationships;
all she know is that they show it and live it better than most other people.

“I’m not sure they understand the full implications of what a relationship entails, but
they seem to have the right basics in place. We’re happy they found each other,
even though we worry about them getting too physical. Every time we leave the
room and leave them unattended we know they’re up to something, and we worry
because of possible consequences, but we can’t put them in a cage either. We want
to them to experience as much as possible, within the realms of safety.”
Veronica explains that the ‘birds and the bees’ have been explained to the couple on
many occasions, but she can’t be sure that they will follow the ‘rules’.

“They’re human after all, and in this area they’ll probably behave just like other
young people. The only problem is that if something happens, the consequences in
their case is much bigger, so we have to be more careful and we don’t leave them
alone for too long.”

Bjorn is clearly embarrassed by this conversation so Paula jumps to the rescue by
changing the subject to tell me about one of Bjorn’s surprises.

“Bjorn gave me this little box,” she tells me enthusiastically, “and when I opened it
there was a soft toy. It was really sweet, but then, when I got the soft toy out, I
found a ring inside. So first I thought that I was getting a soft toy, but in reality I got a
ring too. How sweet is that?”

“But, you also give me lots of nice things,” says Bjorn. “Tell them about the frames
you made for me, and how many things you make with your own hands,” he eggs
on.

“I like doing things myself,” explains Paula. “So I made him handmade frames with
photos of us together, so that he can hang them where he wants. I also made him
lots of greeting cards. I like doing these things for him because he’s really nice.”

Wondering whether this relationship is a little bit too good to be true, I asked the
couple whether they’ve ever had a fight. Silence ensued for a few minutes, as they
both looked at each other clearly struggling to remember a particular fight.

Paula is the first to break the silence – she explains that whilst they might have
fought sometimes they could never stay angry.

Bjorn also has difficulties remembering the reasons behind any of their fights, and
adds that whatever happened they’ve now forgiven each other and that the past is
in the past.

“It’s time to go now,” Paula reminds Bjorn, so they get up, grab each other by the
arm, say goodbye. Veronica, lingers behind to tell me what’s on her mind.

“It’s lovely that they’ve found each other,” she says, “but it’s sad that they’ll
probably never have the opportunity to be together like a normal couple. Unless
there’s some kind of assisted-living arrangement, where they can move out and be
together with help for their daily needs, they will never be able to live together. I
wish that they could, but the residential homes that there are at the moment are not
adequate for this sort of thing. I might have to take the initiative and do something
myself to get the ball rolling.”

According to Dr. Claire Azzopardi, “research carried out in Malta on the topic of
sexuality and young people with intellectual disability has shown that parents are
very worried about two issues; unplanned pregnancy and sexual abuse. Wider
research and practice has proved that teaching what is known as Rights, Risks and
Responsibilities through sex and relationship education to people with intellectual
disability who aspire to be or are in a relationship, empowers them to make an
informed decision when it comes to sexual encounters”.

Inspire’s vision is to see greater inclusion of persons with disabilities in the wider community. It works towards empowering individuals like Bjorn and Paula to reach their fullest potential, create opportunities for them and to change attitudes in our society. It does this by providing a holistic range of services and programmes to children and adults with a disability, and by advocating for their rights to equality and inclusion.