‘I love working; it’s so much better than staying at home doing nothing’ 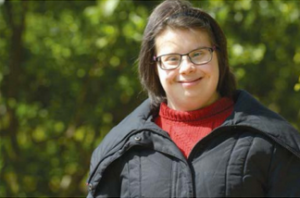 What is the key to happiness? Countless scholars have debated the question – but for Gayle Mugliette, the answer is very simple.

“Nature, the sound of birds and, most of all, seeing other people happy. My mother always tells me: ‘Keep a smile on your face’,” says the 27-year-old, who has Down Syndrome.

“That’s right,” her mother Marthese nods. “Not that she needs much reminding – she always has a ready smile for everyone.”

As World Down Syndrome Day is marked on Friday, Gayle tells The Sunday Times of Malta of her love of learning – while Ms Mugliette explains how much her daughter taught her.

As a secondary school student, Gayle used to wake up every morning looking forward to school and delving into her favourite subjects, which included religion, maths and home economics.

Now as an adult, Gayle wakes up with the same enthusiasm to go to work. Thanks to Inspire Foundation, she has been employed with Middlesea Insurance for the past three years, operating computer scanners. She was previously given training through the cooperative agreement Inspire had with the Employment and Training Corporation.

Gayle describes her work environment as being very pleasant and welcoming. She often joins her colleagues for evenings out. She was thrilled when after eight years of trying to locate a job, she was finally accepted.

“I love working; it’s so much better than staying at home doing nothing. With my salary, I’ve been able to do lots of things, like going abroad, buying clothes and, recently, even buying a tablet.”

Gayle spends her free time exercising on a treadmill and listening and dancing along to music (she is a big fan of the late Whitney Houston). She loves reading Nancy Drew books and solving word search puzzles, which she completes by herself.

She also helps out in a number of household chores, such as drying the dishes and putting them in their place, making her bed and recently – to her mother’s delight – vacuum cleaning. However, Gayle very much wishes to have a place where she could hang out with her peers and socialise.

As president of the Down Syndrome Association, Ms Mugliette said the association has for many years been asking local authorities to make available premises which they could turn into a leisure club.

The club would be equipped with a non-alcoholic bar, which people with an intellectual disability could run by themselves. It would also have billiard tables and other games.

“Come weekends, many people with Down Syndrome have nowhere to go to, unless they go out with their parents. Entertainment establishments in Paceville are not suitable for them.

“As an association, we have sometimes rented out disco halls in hotels. However, they are normally not available in the weekends, which is when they would most like to go out, like other people.”

Ms Mugliette urges parents to not mollycoddle their children with Down Syndrome but to treat them as they would others.

While their limitations should be recognised, she continues, it doesn’t mean that the parents should not push them to achieve.

“They need help. They have huge potential. They have abilities. Let us not stop believing in them.

“They have a lot to teach us. The concept of jealousy doesn’t exist in their world – they address you in the most sincere of terms. They banish negativity by exuding optimism.

“If we could only imitate them, our lives would be much more positive.”

And looking at Gayle, one can’t help feeling that there really is no disability – only diverse abilities too often muzzled by the disabling barriers of social exclusion and the jaundiced eye of prejudice.