Giuseppe and his special smile 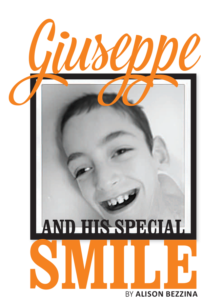 Despite the many difficulties that this young teen has had to face, Giuseppe manages to leave a positive mark on all those who cross his path. This incredible thirteen year old cannot do it with words as he cannot talk yet, but somehow, he does it with a special smile that penetrates every heart.

When Giuseppe’s mother, Mariella, was 6 months pregnant, an ultrasound showed a possible blockage in the baby’s intestines. Giuseppe was born just one month later, and being pre-mature and with a possible complication he was taken straight to the Special Care Baby Unit.

“They took him away immediately,” explains Mariella still with pain in her voice. “The condition was life threatening so in order to confirm the diagnosis, they administered a green liquid and took an X-ray of his intestine. The diagnosis was confirmed and Giuseppe had to undergo surgery the next day. Luckily his intestines started to function normally but, unfortunately, his stomach acid leaked out into his body and even went through his stiches. This meant that Giuseppe was being poisoned and in order to save his life he had to take a lot of medications.”

Luckily baby Giuseppe survived the ordeal, but things were about to get even harder for him and his family.

“When he was three months old, Giuseppe’s parents noticed that he was neither hearing and nor seeing. “We took him for an MRI scan and it resulted that although all the physical connections for sight and sound where present, there was a global delay that was affecting Giuseppe’s senses, in fact at three months of age, Giuseppe was still reacting like a new born baby. For a while he had to wear hearing aids and after a couple of years the family travelled to Manchester to get Giuseppe a cochlear implant. Surprisingly the doctor refused to perform the implant surgery, and insisted that Giuseppe would start hearing by the age of 10. “He was right,” adds Mariella with a smile. “In fact Giuseppe starting hearing at age six, and even his vision got better and better as the years went by.”

At age three Giuseppe was also diagnosed with Cerebral Palsy – a condition caused by abnormal development or damage to the parts of the brain that control movement, balance, and posture. This means that although Giuseppe understands most things, his disability has taken a toll on his physical and mental development. When Giuseppe had just turned 11, he was also found to be severely underweight and had to have a PEG to assist his feeding. A PEG is a feeding tube that is inserted directly into the stomach to facilitate meeting nutritional needs.

“For a thirteen year old Giuseppe has been through so much,” explains Mariella.

“Sometimes he has not been able to sleep for many nights due to unknown pain, but thanks to his pediatrician and other professionals at his school and at Inspire, he is now back on track.”

Back in 2010 Giuseppe started attending Inspire’s Winter Programme. He attended cooking sessions, which he enjoyed, but he was at his happiest during his Therapeutic Horse Riding Sessions. “Giuseppe has a special kind of love for animals,” says Mariella, “he can never get enough of the horses at Inspire. He absolutely loves it, and it’s such a pleasure for us to see that therapy can be so beneficial and also so much fun for him.”

Over the years, Giuseppe’s family has noticed significant progress in their son. “He has become very perceptive,” says Mariella. “He now understands us whenever we’re talking and he can follow a TV programme with ease. He also responds and reacts appropriately based on what he sees, and nowadays he moves his head quite a lot, something he wasn’t able to do when he was younger.”

“Thanks to Inspire’s Winter Programme, and his sponsor Casino Malta, Giuseppe has been able to experience new things that we had never imagined him capable of. Horse riding for example, has helped his posture and unleashed his hidden potential.” Volunteers at Inspire are particularly attached to Giuseppe because he’s such a happy child. “Seeing him get stronger and stronger with every horse riding session, gives them immense satisfaction” says Mariella.

Mariella and her husband have learnt to appreciate Giuseppe’s little victories, because they know that for their son they are huge steps in the right direction. “There’s no sweeter feeling than when Giuseppe comes home form school with a Mother’s Day card or a handmade gift for one of us. His face lights up with joy and thinly veiled pride because, he knows that not only will we appreciate his gifts, but that it will actually make our hearts melt. As soon as he comes home from school, he starts laughing and making cheerful noises – the type that I’ve learnt to recognize as him having something in store for me.”

At Giuseppe still can’t talk, and though his mother wishes to hear him call her ‘mama’ at least once in her life, the real reason she wishes him to speak is to be able to communicate when he’s in pain or uncomfortable.

“There’s no worse worry than not knowing what is bothering your child. I would give anything to hear him talk so that when he needs something he can tell us and we can make it better quicker.”

Although Giuseppe’s parents can’t help but worry especially about his future, his smile gives them hope through life. “It’s not just hope that he will keep improving but also hope with regards to our own lives. Remembering just how strong and resilient Giuseppe is, gives us the courage to go on. We now live day-by-day and in the belief that God was and will always be, with him and the rest of our family.

The Farsons Foundation continues to facilitate numeracy skills for childrenpreviousWhat are Social Stories and how can they be used with children on the Autism Spectrum?next