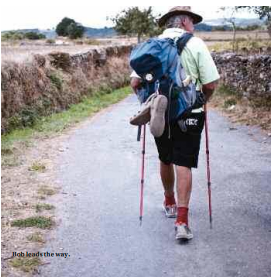 Back in September 2012, Yentl Spiteri (24) was working at Inspire helping young adults with various disabilities find work opportunities and providing them with various training and social skills. That’s where she came across the opportunity for a travel adventure of a lifetime – the opportunity to trek through El Camino De Santiago in Spain, as a fundraising activity in aid of the cause she so strongly believed in.

“I came across a flyer about people’s experience at El Camino De Santiago and though I knew very little about the trip and the trek it sounded like a great challenge. So I spoke to three of my colleagues and we all started getting excited about the idea of living off a backpack and travelling together. The trip was being organized by Inspire’s own fundraising team, so we decided to go for an introductory talk to find out more.”

“After the meeting, my colleagues and I gathered in the parking lot and screamed. We were so excited at the thought of living this adventure together that by the end of the talk we already had plans on how we would fundraise the money, what kind of activities we wanted to organize, and the apparel we needed to buy to survive the trip.”

“After 2 months of washing cars and selling ceramic wedding souvenirs at the Sunday market, we
fundraised enough money to go to Spain. The experience was incredibly surprising because before leaving I
didn’t think that it would leave such a deep imprinted mark on me, however when I got back to Malta and
unpacked my backpack, I looked at the state of my T-shirts and socks, and the whole ordeal hit me allover
again.”

“The Camino has a definite start and finish, so upon completion
of every single stage one feels an 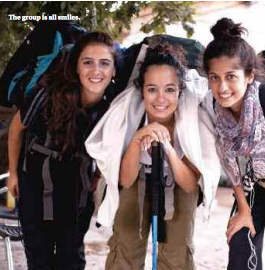 overwhelming sense of purpose. It’s not like you’re out for a walk just wandering about. On the contrary, throughout the way every walker feels a strong drive to get to the next stage, even though the goal is not the destination but ‘the way’. Whilst I did not have any life changing expectations, and was simply looking forward to walk, meet new people, take a lot of photos and enjoy myself with my colleagues and friends, the trip ended up being much more than that.”

“I had planned to spend as much time with my colleagues as possible and to walk together singing Disney songs, but after some time, the weight of a 10kg back pack, and the pain from blisters and tired knees did not bode well for good group dynamics, so I ended up walking alone for some time. This gave me a lot of ‘me-time’ something that I strive to have in the socially immersed life we live today. Having no Internet also made it easier to connect with the environment and at one point I felt so at one with my surroundings that I was convinced that Mother Nature had been waiting for me all my life.”

“Normally I am not a morning person but every day the Albergue’s alarms used to go off at 6:30am, and all the residents who would have spent the night there would start hustling, taping their blistered feet and queuing to use the bathroom. Soon after we’d be out in the dark humid air having breakfast at the nearest
snack bar and a few minutes later we’d be following the yellow arrows, which lead to the next Albergue.”

“The first couple of hours of the day used to be hard, but once the sun started to sparkle across the
horizon, and soft rays started to make their way through the wet trees, the scenery became so
breathtaking that I soon forgot the blisters and the hardship of waking up so early. Everywhere I looked was
so picturesque that towards the end of the journey I had so much adrenalin pumping through my system
and I felt so fit and healthy that in the mornings it only used to take me 10 minutes of walking before the
aches went away.”

“A foodie might describe the Camino Trail as a sort of Tapas bar crawl with very long walks in-between. The
sight of a tapas bar in the middle of nowhere used to set my buds on fire; I never knew that I could eat so
many empanadas but after 20km of walking, anything tastes divine. Tapas and other nibbles, which by the
way are absurdly cheap, used to be accompanied by some cao con leche (hot cocoa) or by some white or
red wine from the region.” 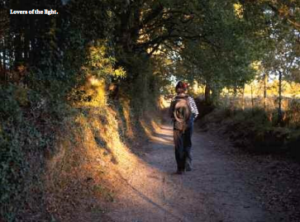 “Of course, after walking all day in the sun, showering is vital, but the bathing procedure took me a few days to get used to. In public Albergues women of different shapes and sizes wander around the shower room stark naked having normal conversations as if they had just met each other on the Sliema front. We felt frowned upon for wearing a bathing costume in the shower, and one time I even got a back slap from a middle aged Spanish woman who said “Chica, on the Camino, we shower nekked”.

“One morning, back on the trail, we met Bob, a 70 year old man from South Africa. We spent a couple of hours walking together discussing a range of subjects, from world changing political strategies to different clothes-washing and overnight-drying methods. I can still remember his sharp British accent and how his voice cracked when he mentioned his wife; he described her in a way that every woman would love to be described; he spoke of her beauty as well as her mistakes in a way that he made imperfection sound beautiful. His goal was to meet his daughter in Santiago, as well as to finish the whole journey with one pair of socks.”

“The trail is not a walk in the park – the terrain varies from flat tarmac to steep muddy hills, which used to
leave me breathless. There were a couple of moments when I felt very tired and hungry and when I
doubted my choice of adventure. I wondered why I chose to ‘suffer’ by walking through northern Spain
instead of partying in Barcelona with the rest of my friends, but at the end of the day the journey helped
me get to know myself. I questioned my purpose in life; it made me face obstacles and pain and experience
extreme emotions. I can certainly say that it took me outside my comfort zone which helped me grow.”

“I would recommend this adventure to anyone who wants to experience life in its rawest form, travelling
with limited resources, not being pressured by time, deadlines and social implications. I would recommend
going without any expectations and being open and flexible to welcome the experience as it comes to you.
A pumped up playlist and good headphones for those killer slippery hills would also come in handy.”

Spanish for The Way of St James, el Camino de Santiago dates back over 1,000 years. In total it is an 800km
trek which starts from from St Jean Pied du Pord in the Pyrenees Mountains in France, and goes through
the massive wine region, up to the medieval Cathedral of Santiago de Compostela in Galicia which is in
north western Spain. According to legend, the remains of the apostle Saint James the Great, are buried
here.

The Way became a UNESCO World Heritage site in 1985.
Historically the pilgrimage was exclusively 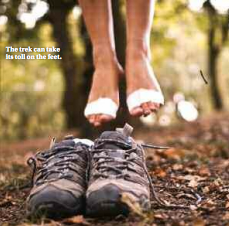 religious but in recent years it has become a way for people to get in touch with nature, and a challenge often done in aid of a good cause.

INSPIRE will be leading guided pilgrim covering 100km of the trek in aid of Inspire Malta. Leaving from Saria and arriving 5 days later at Monet de Gozo – Santiago de Compostela.

While a high degree of fitness is not a must, participants will be required to walk approximately 21 kilometres a day, carrying a backpack.

An experienced tour leader will lead the group, advising members on how to be prepared as soon as they sign up for the challenge.

Flights, Accommodation, Transfers, all Taxes, Guides & a donation to Inspire.