Last chance to see tribali live in concert THIS SUMMER 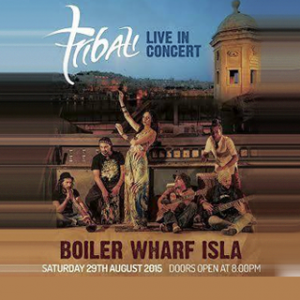 Malta’s leading world music band Tribali is experiencing its busiest summer yet with performances not only in Malta but also around Europe.

The final Tribali concert for this summer will be held in Malta on Saturday, 29th of August, at the Boiler Wharf in Senglea.  This will be a one of a kind experience with an especially outstanding set in collaboration with a number of artists. The band will be performing various hits from their three best-selling albums, while also presenting the audience with a number of new songs.

“We feel extremely blessed to have been offered such great opportunities this season,” said Eliza, the band’s main vocalist. “We have had the opportunity to share our music with new audiences around Europe and, to our great satisfaction, our music was received exceedingly well.”

Tribali’s first show this year was held at the Eksi Festival in Turkey at the end of May, followed by three shows in Hungary in June, including a very successful headlining show at the Everness Festival. Finally, Tribali performed at three festivals in Finland in July, namely the Espan Lava Festival, the Jyvaskyla Festival and the Kaustinen Folk Music Festival, all of which reaped great appraisal.

Following yet another successful performance at The Farsons Great Beer Festival, their upcoming concerts this summer include one at the Festival Sete Sois Sete Luas in Pollina, Sicily on the first day of August and the last one in Malta on the 29th August at the Boiler Wharf in Senglea.

Tribali and the concert organisers launched this event at The Inspire Foundation in Marsascala where they treated Inspire’s summer school students to a live interactive gig.

“This concert will be the climax of a great summer for Tribali and we encourage people to come and experience this euphoric journey with us,” said front man Peter Paul.  “We are also happy that the profit from this event will be donated to ‘Inspire’.  We have great respect for the genuine work Inspire does with people in need.

Tribali would like to thank Benny & Clive for the faith they showed in the band and in allowing them to venture freely in order to present the audience with a show like no other.

Throughout its nine years of existence, Tribali has grown into one of the  most popular live acts on the Maltese Islands, attracting audiences that span over several generations. The band is presently working on new material in preparation for its fourth album. For more information on Tribali, visit www.facebook.com/TribaliMusic or www.tribalimusic.com.